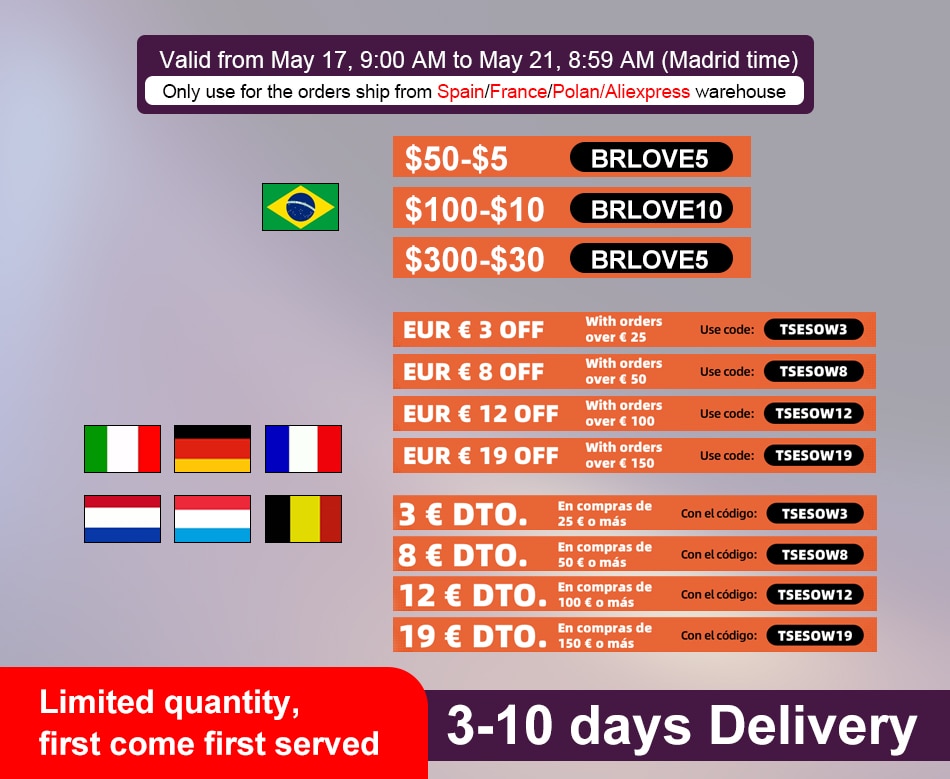 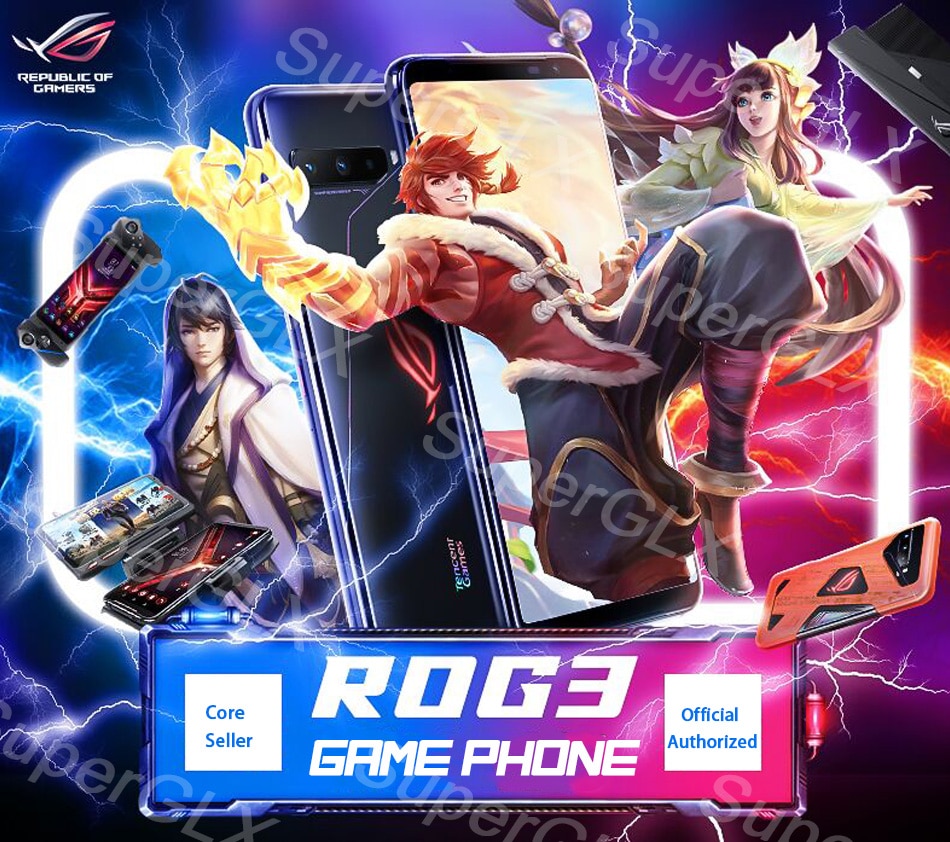 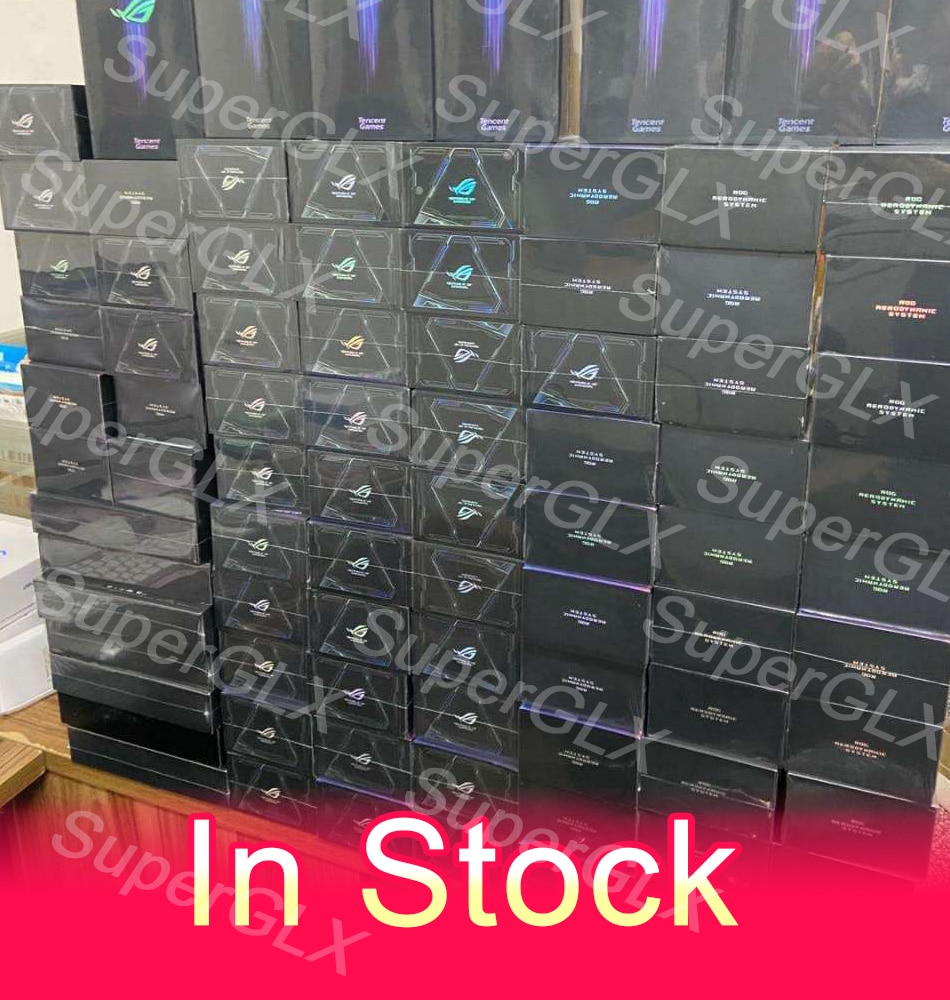 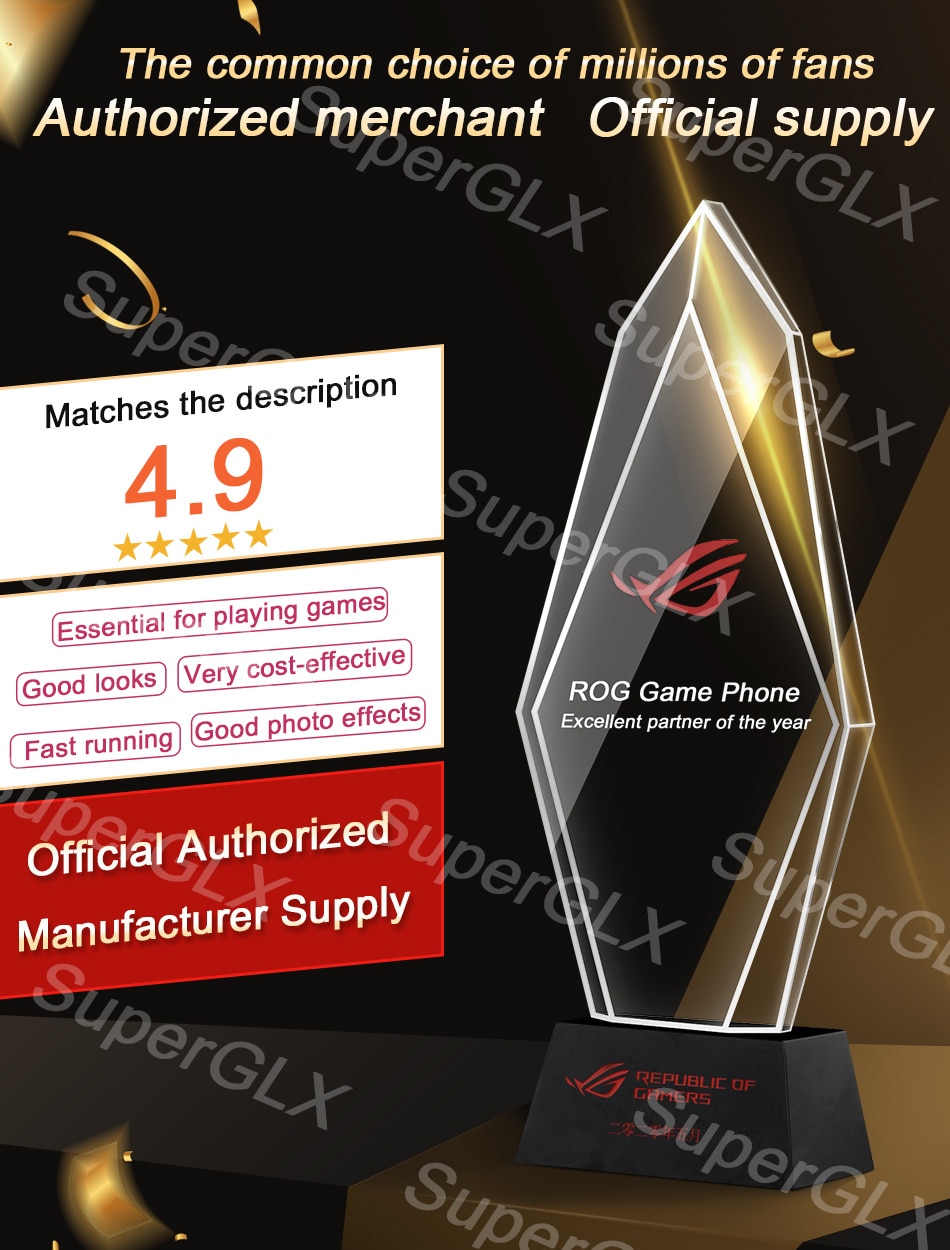 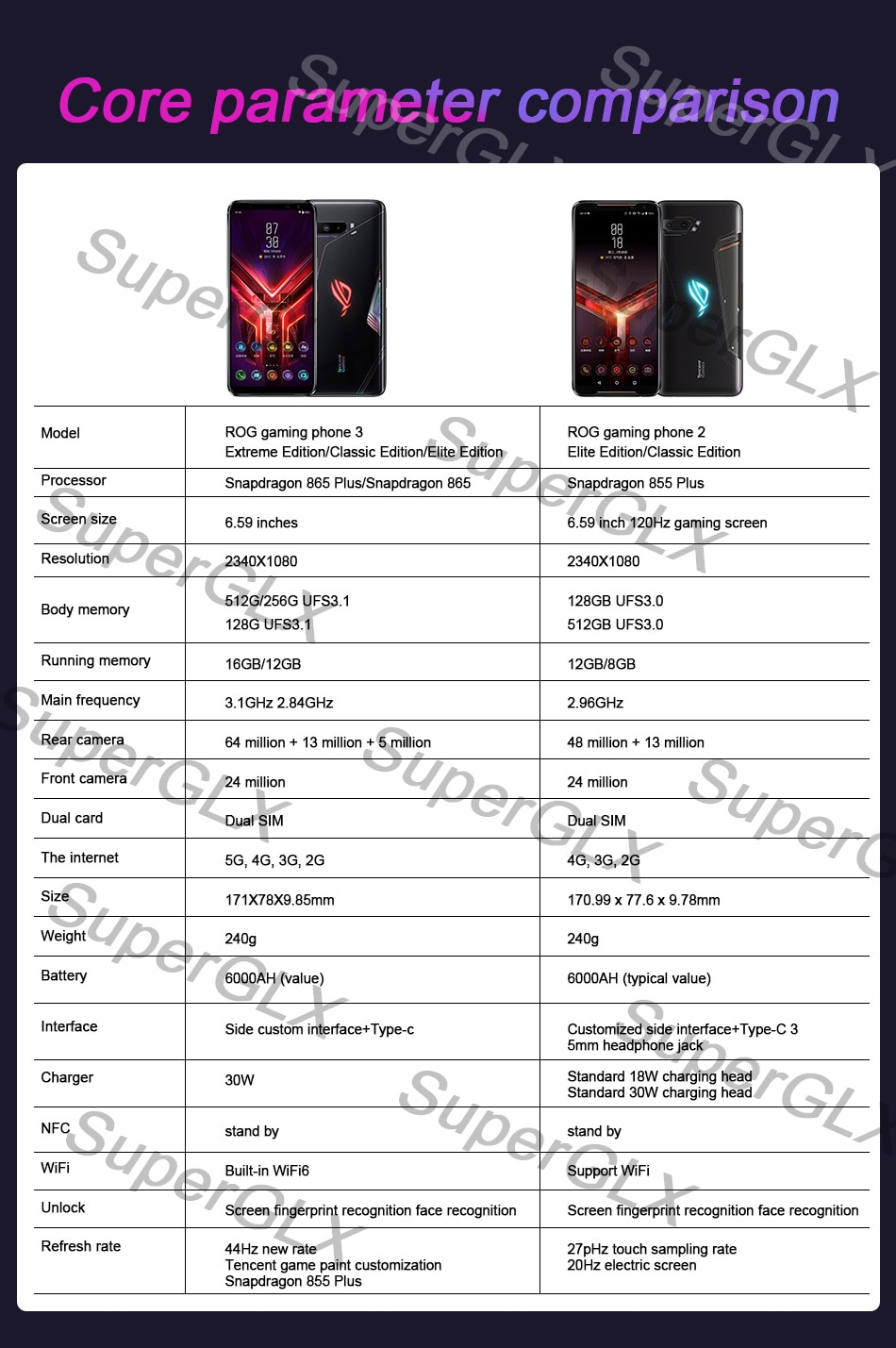 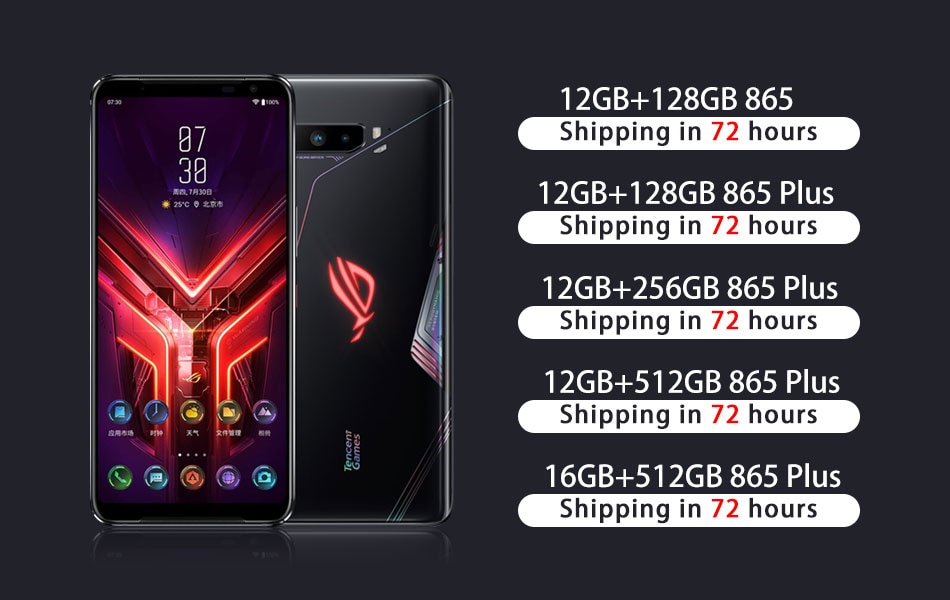 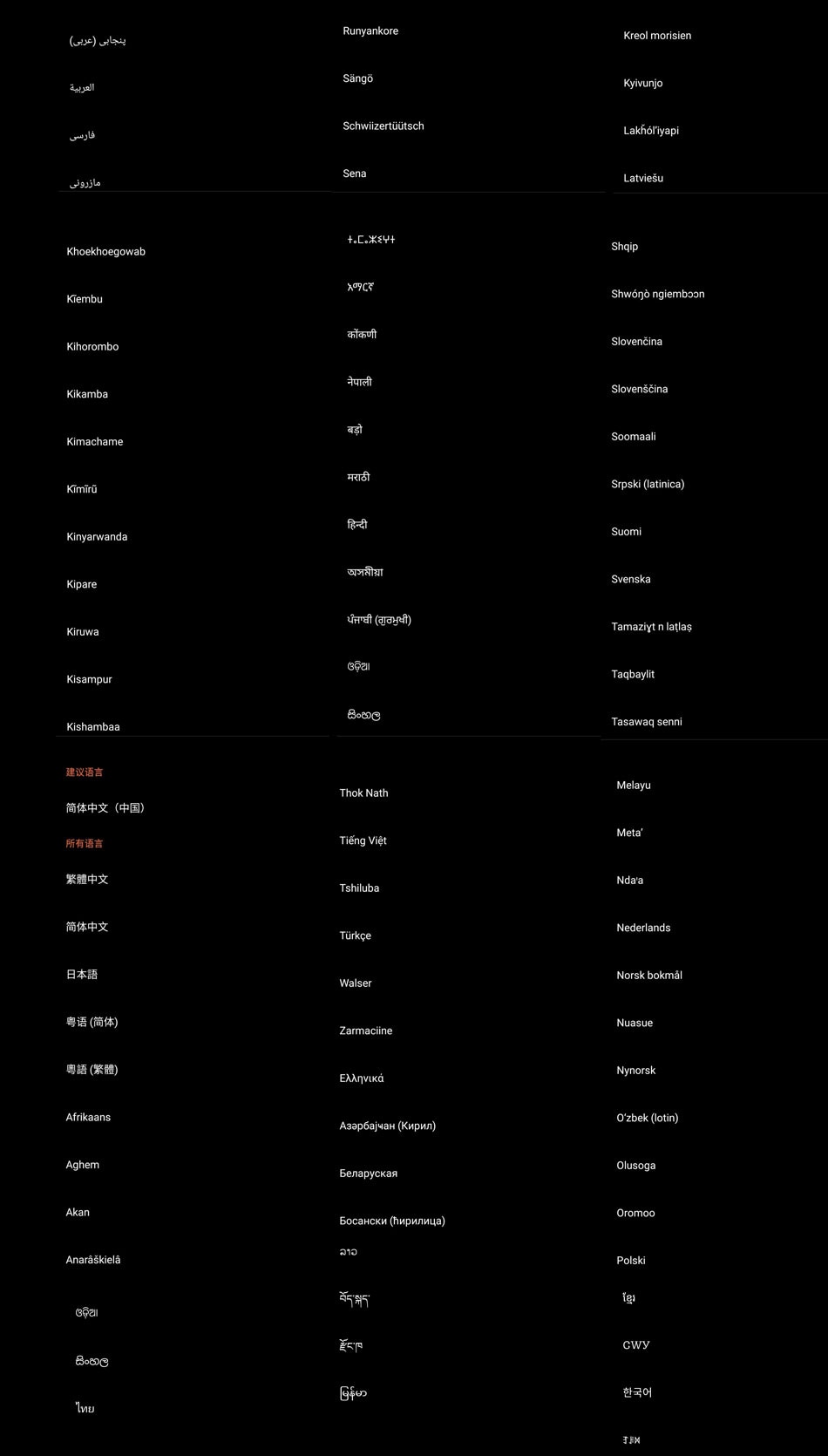 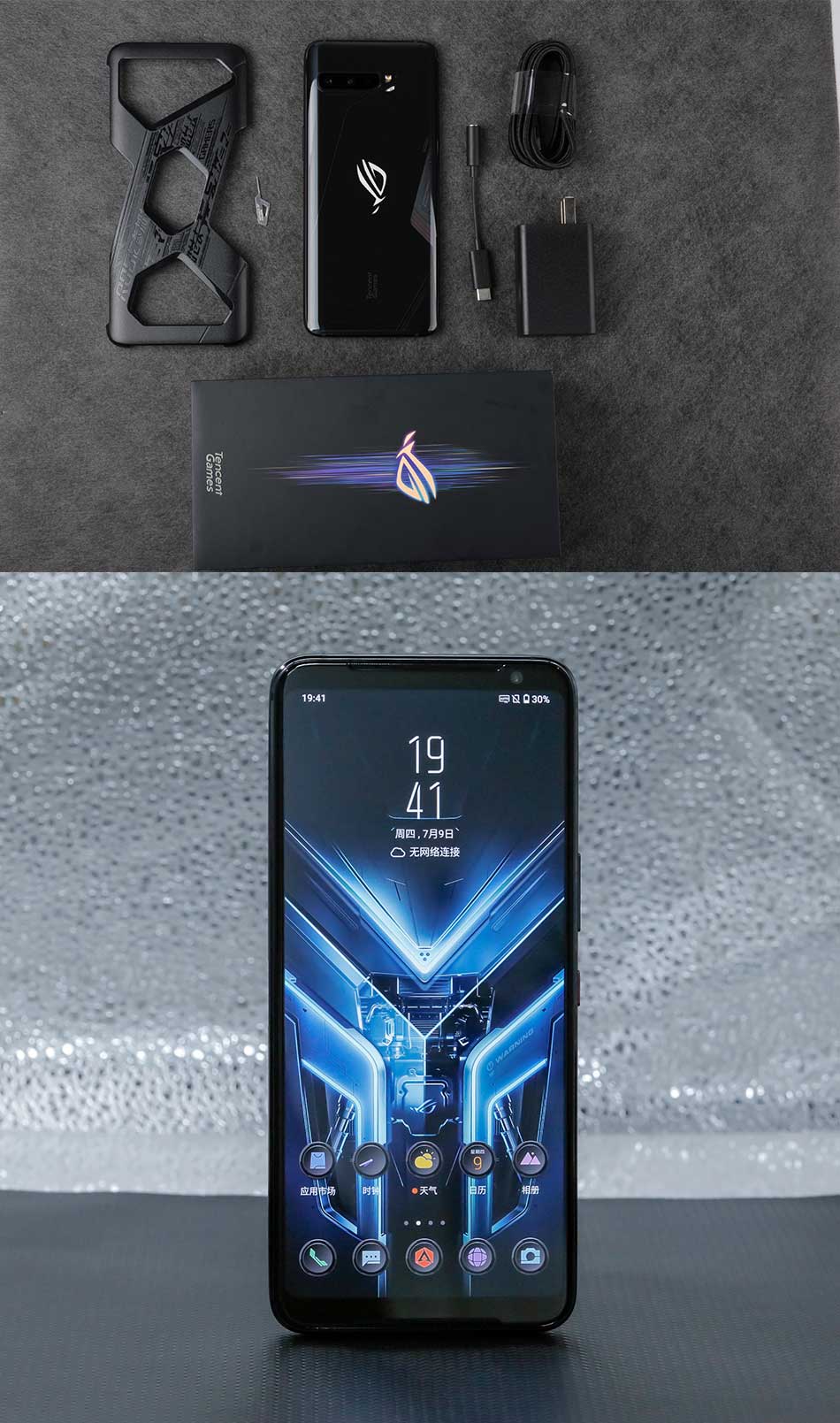 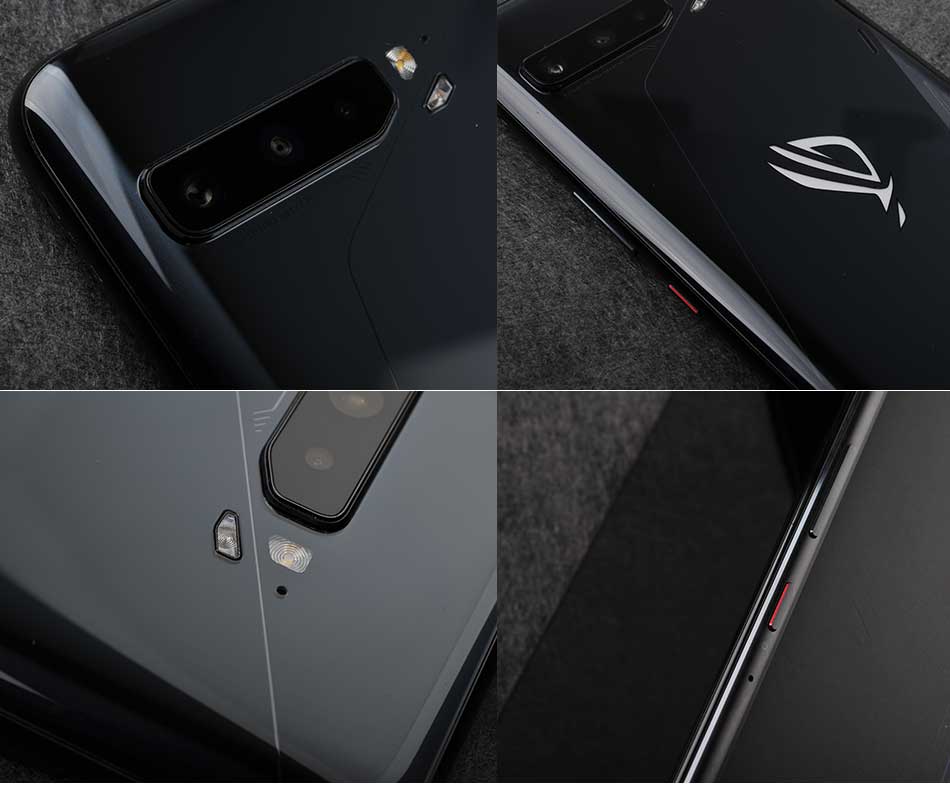 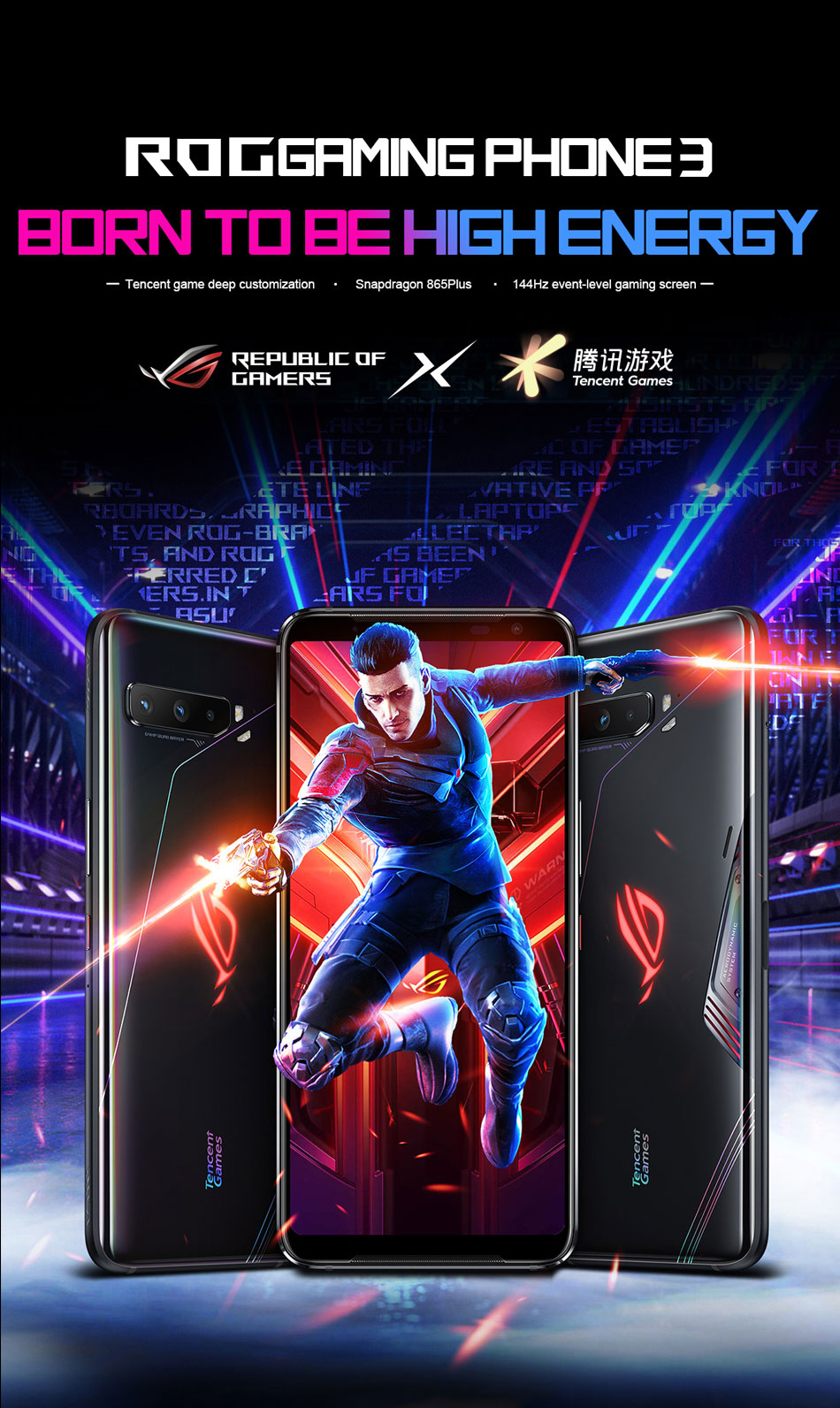 ROG Phone 3 is the most powerful gaming phone to use the latest Qualcomm® Snapdragon™ 865 Plus 5G Mobile Platform with advanced 5G1 mobile communications capabilities. Built to satisfy even the most hardcore gamer, it has an amazing new 144 Hz / 1 ms display that leaves the competition standing. Alongside upgraded features like AirTrigger 3, you’ll find everything you loved about the previous generation, including a monster 6000 mAh battery2, the unique side-charging design, dual front-facing speakers, and a full range of modular accessories. ROG Phone 3 sets the new standard for mobile gaming!

Powered by the world’s fastest3 Qualcomm Snapdragon 865 Plus 5G Mobile Platform, the latest LPDDR5 RAM and UFS 3.1 ROM, ROG Phone 3 delivers the ultimate in overall performance and gives you a super-smooth gaming experience. 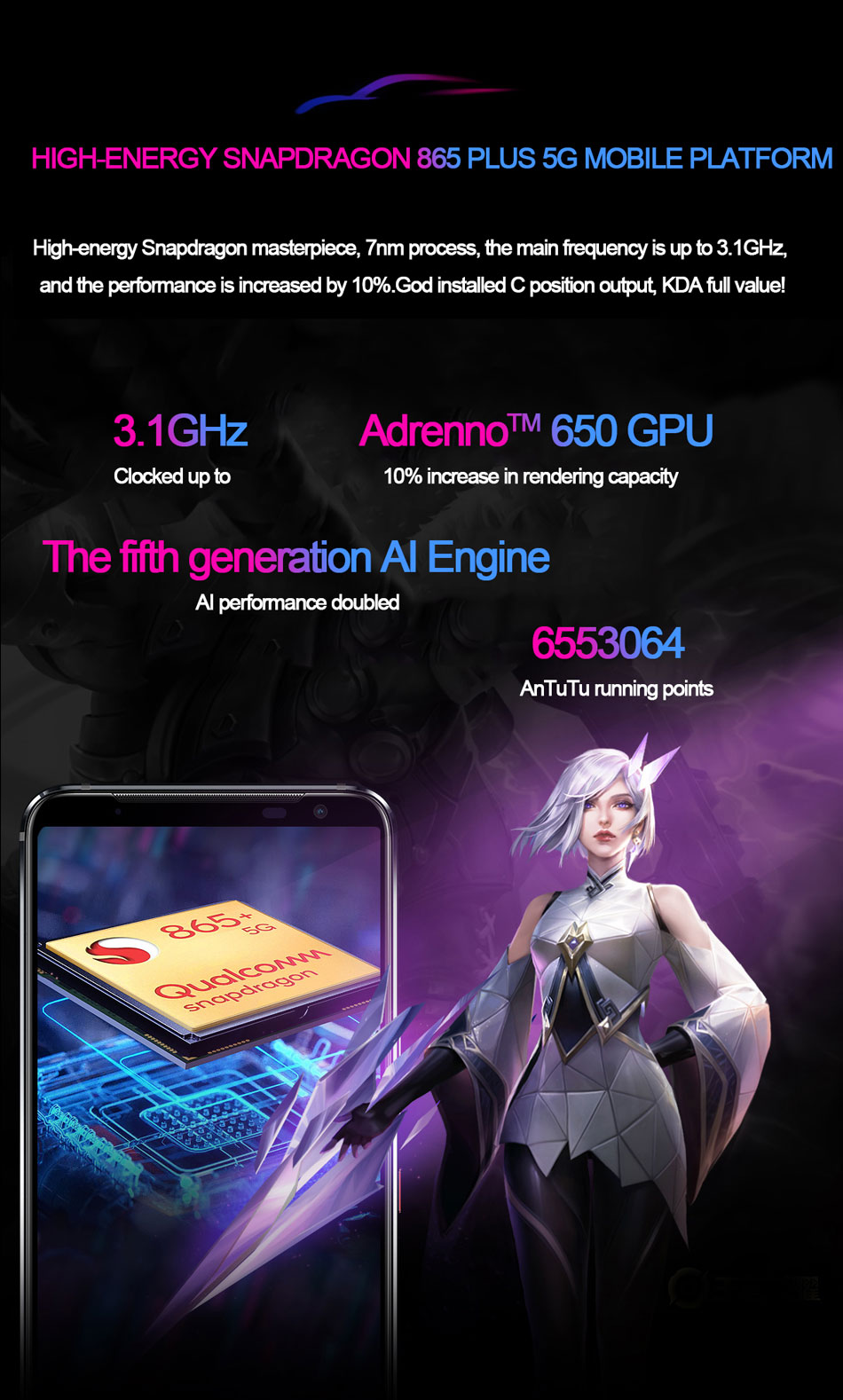 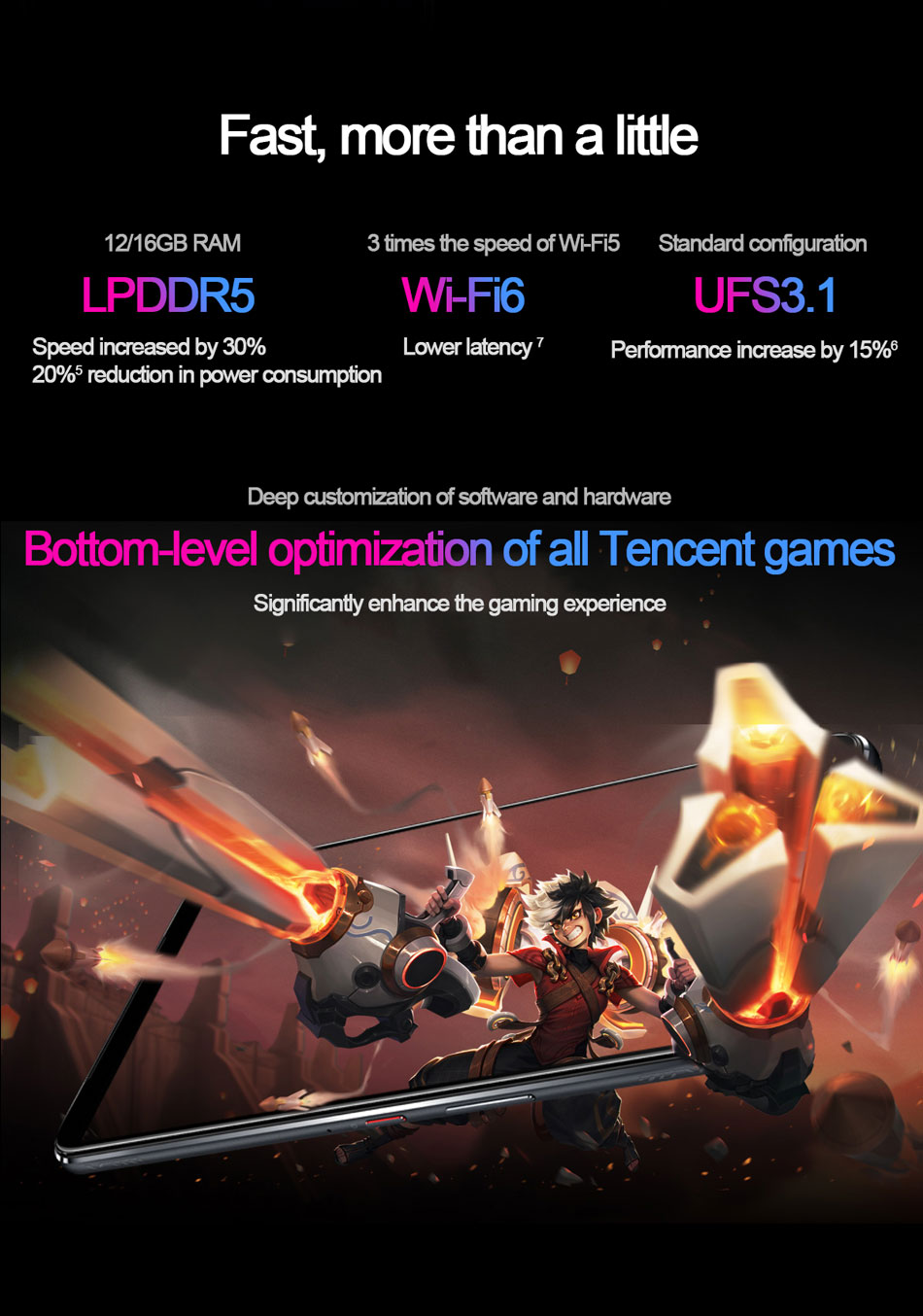 144 Hz Refresh Rate
To achieve a smoother, more fluid viewing experience that makes gaming even more immersive, we’ve developed a screen for ROG Phone 3 that boasts an industry-leading 144 Hz refresh rate. Content is more vivid, clearer, and looks more lifelike. It’s also much easier on the eyes, so you can game for longer without discomfort. 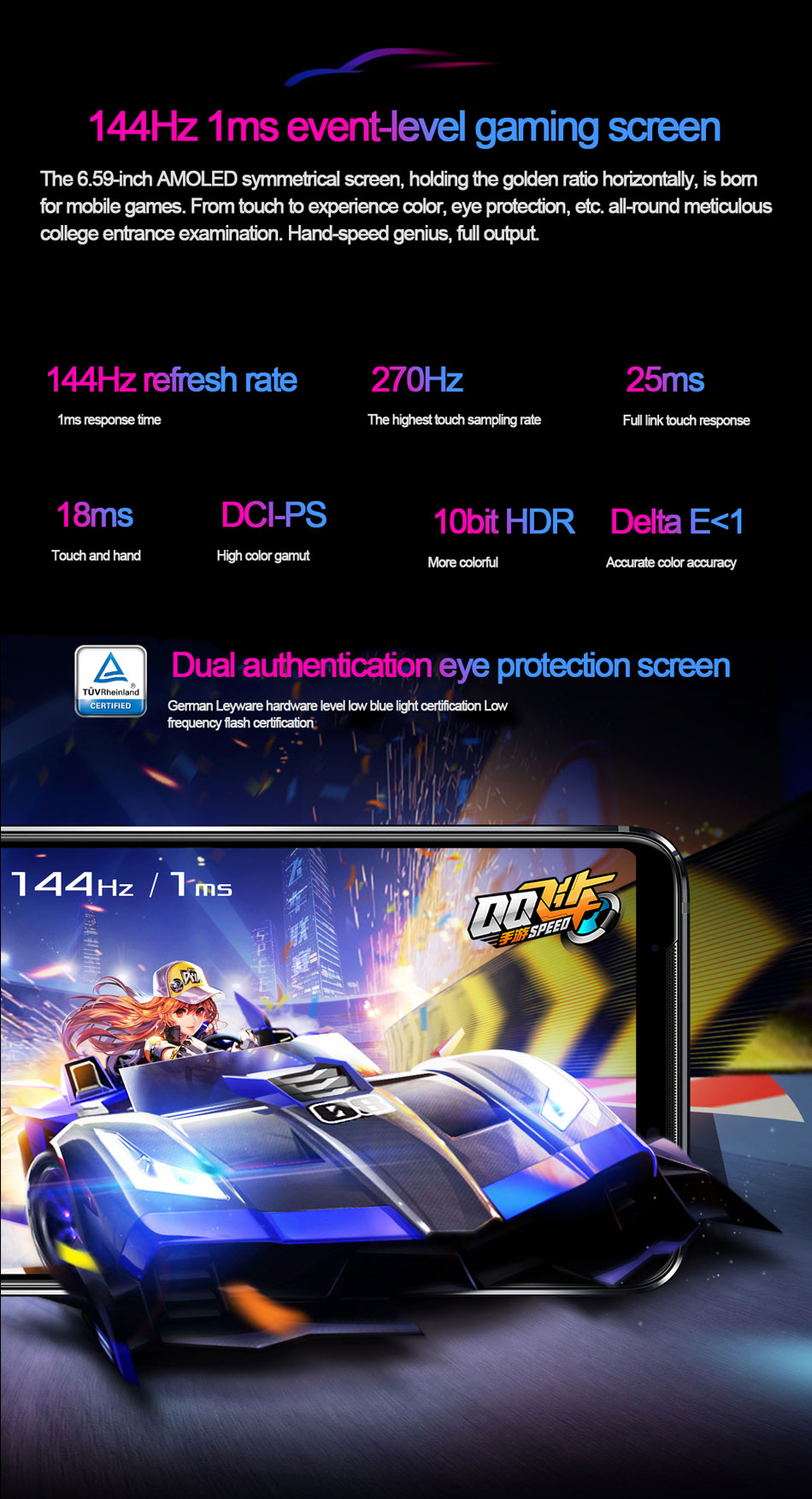 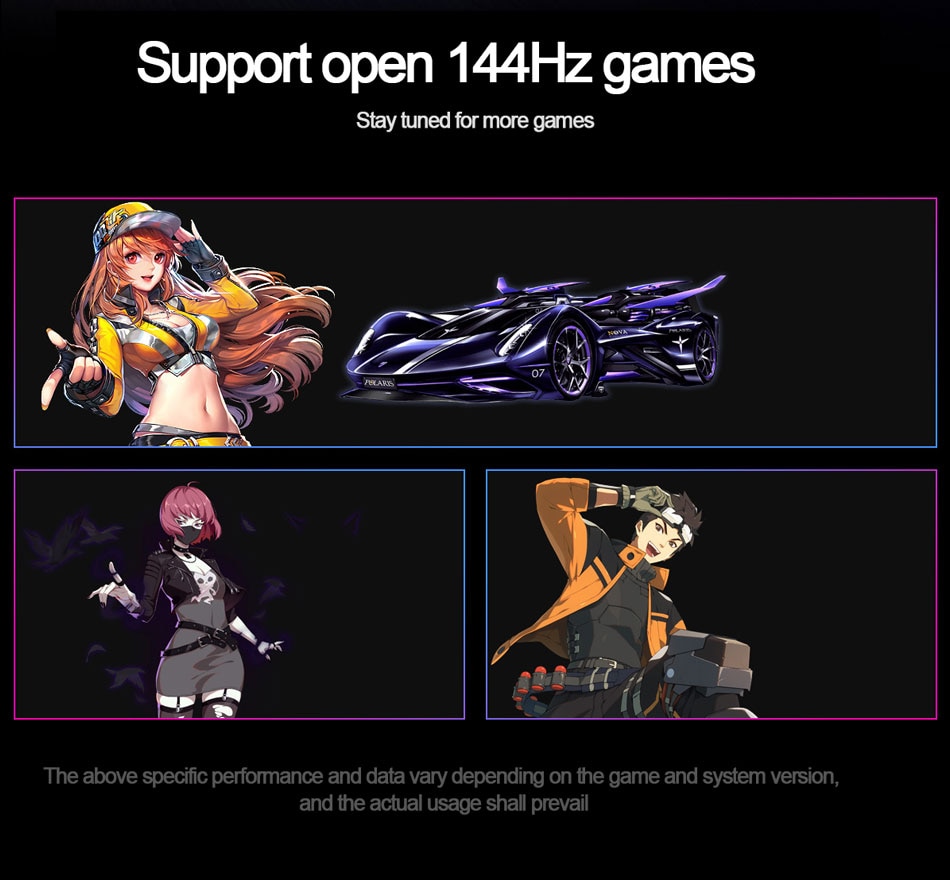 Play Cool
The GameCool 3 cooling system in ROG Phone 3 uses an advanced 3D vapor chamber and a large heat sink that are precisely located to eliminate hotspots. The cooling system is incredibly effective at removing heat during full-speed operation via its specially designed vents.
This comprehensive cooling system allows ROG Phone 3 to easily sustain peak performance during heavy gaming sessions, eliminating throttling to give you an expert edge against the competition. 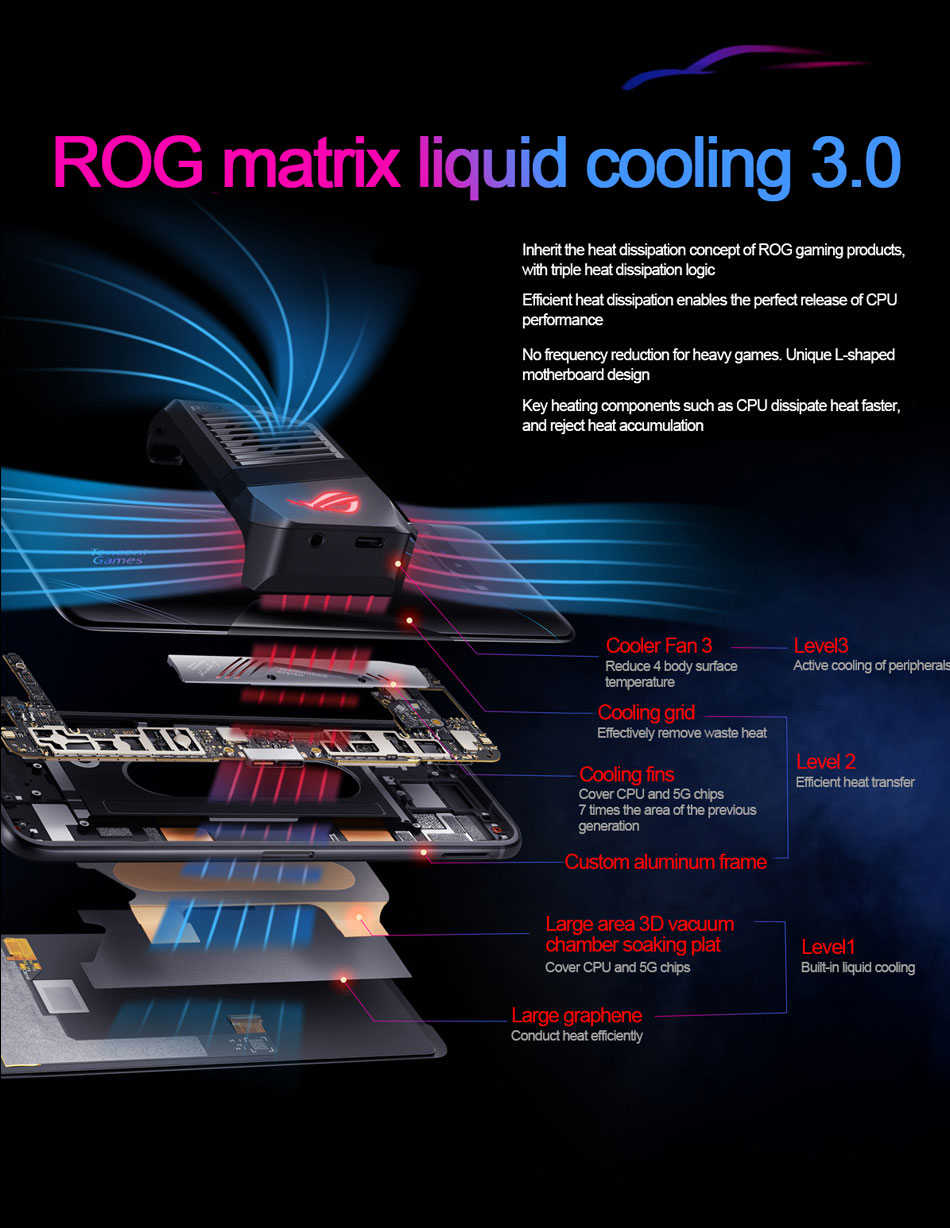 Play Nonstop
You can rely on the monster 6000 mAh battery2 in ROG Phone 3 to keep you going, even in the longest battles. There are multiple passive power-saving mechanisms — including multiple custom battery modes and an exclusive hibernate function — that significantly prolong the time between charges and also increase battery lifespan. 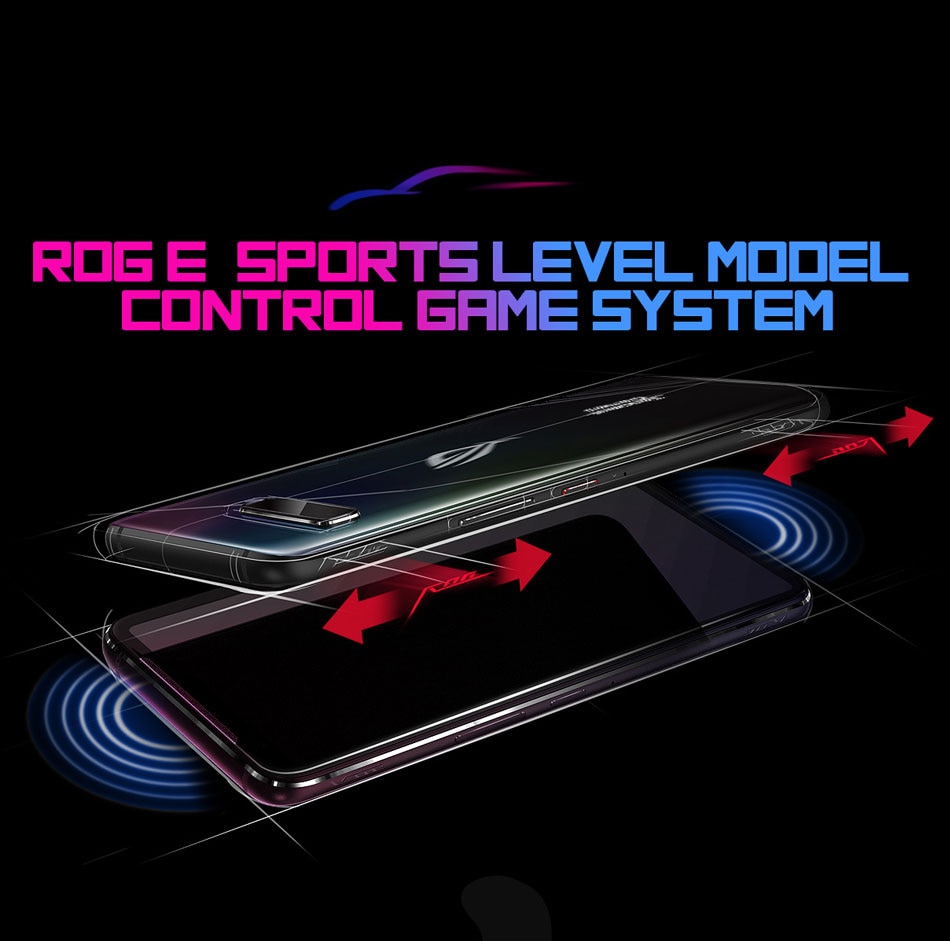 Dual forward speakers & four microphones
Double positive seven magnetic stereo speakers, jointly adjusted by Swedish DIRAC,
Not only does it have a moving sound quality, but it is also easier to listen to the sound
position and kill with a headshot. 4 microphone design, no matter how you hold it, you
can effectively receive the sound, maintain real-time communication with teammates,
and kill the enemy instantly. 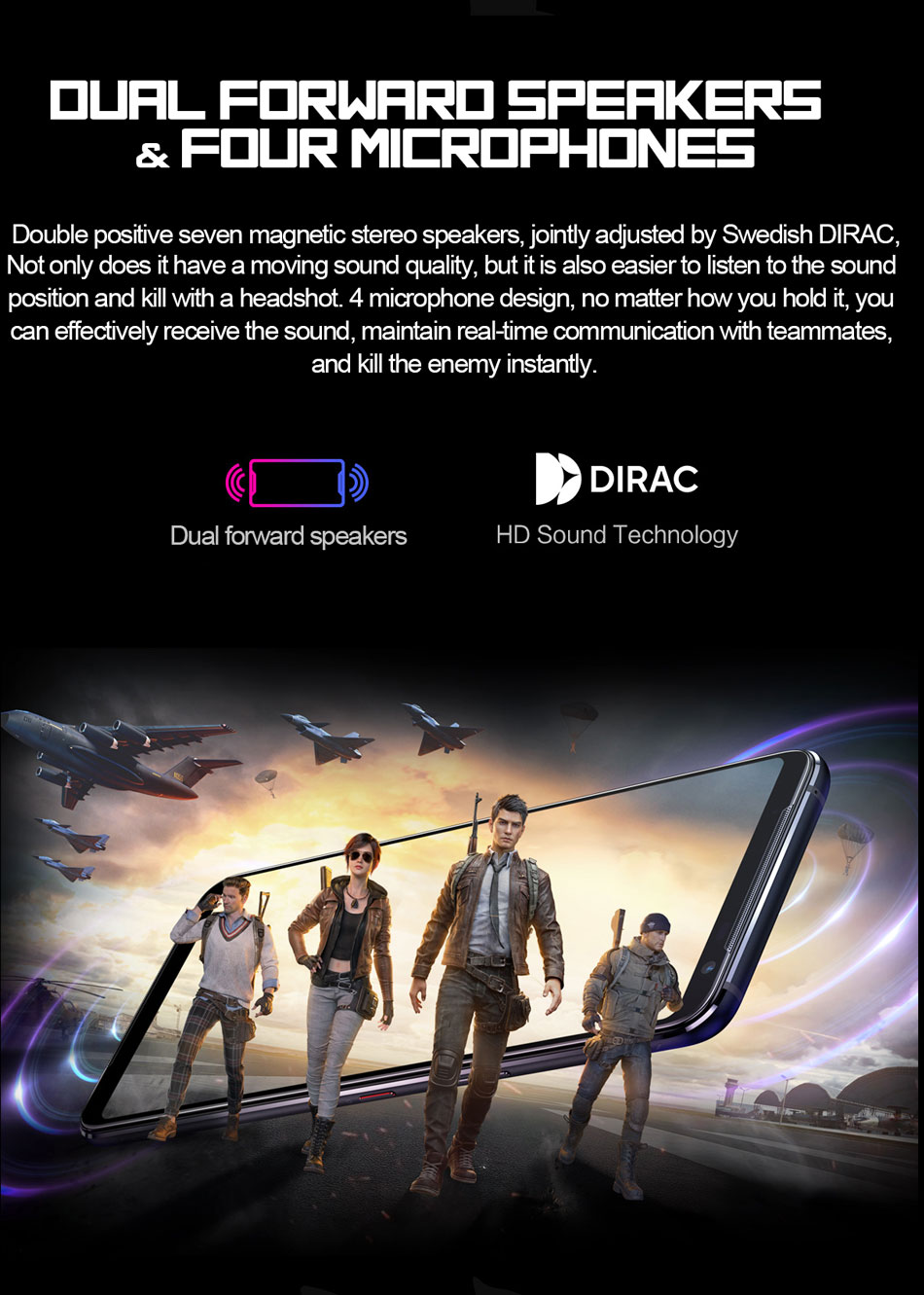 AirTriggers 2X2
shoulder button
Ultrasonic AirTriggers 2X2 shoulder buttons, with its own tactile feedback,
comparable to the handheld gaming experience. The one-side shoulder button
can be switched between single button and double button, high-level operation,
waiting for you to show. There is also a new gesture mapping function, which
greatly improves the playability. 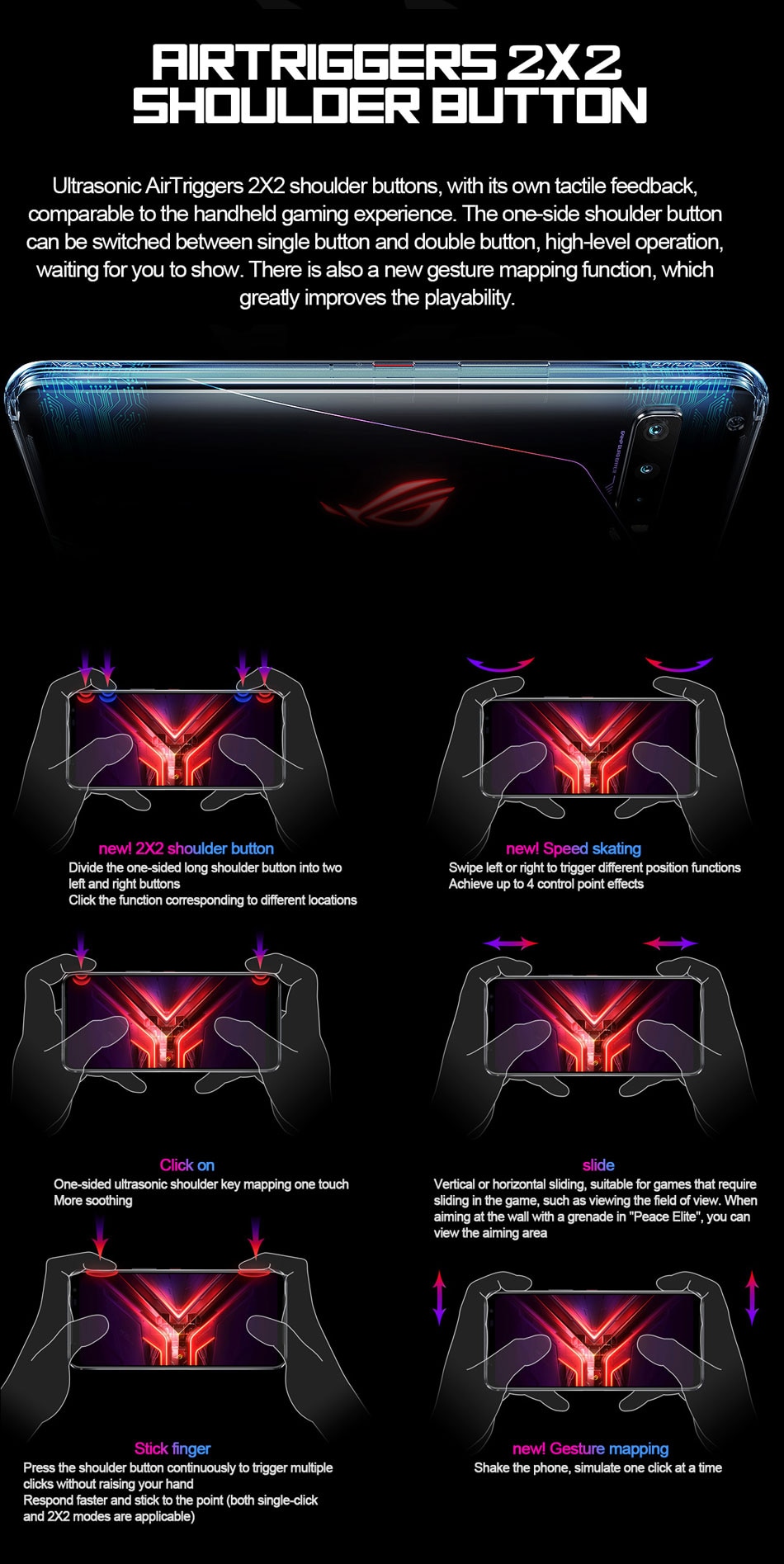 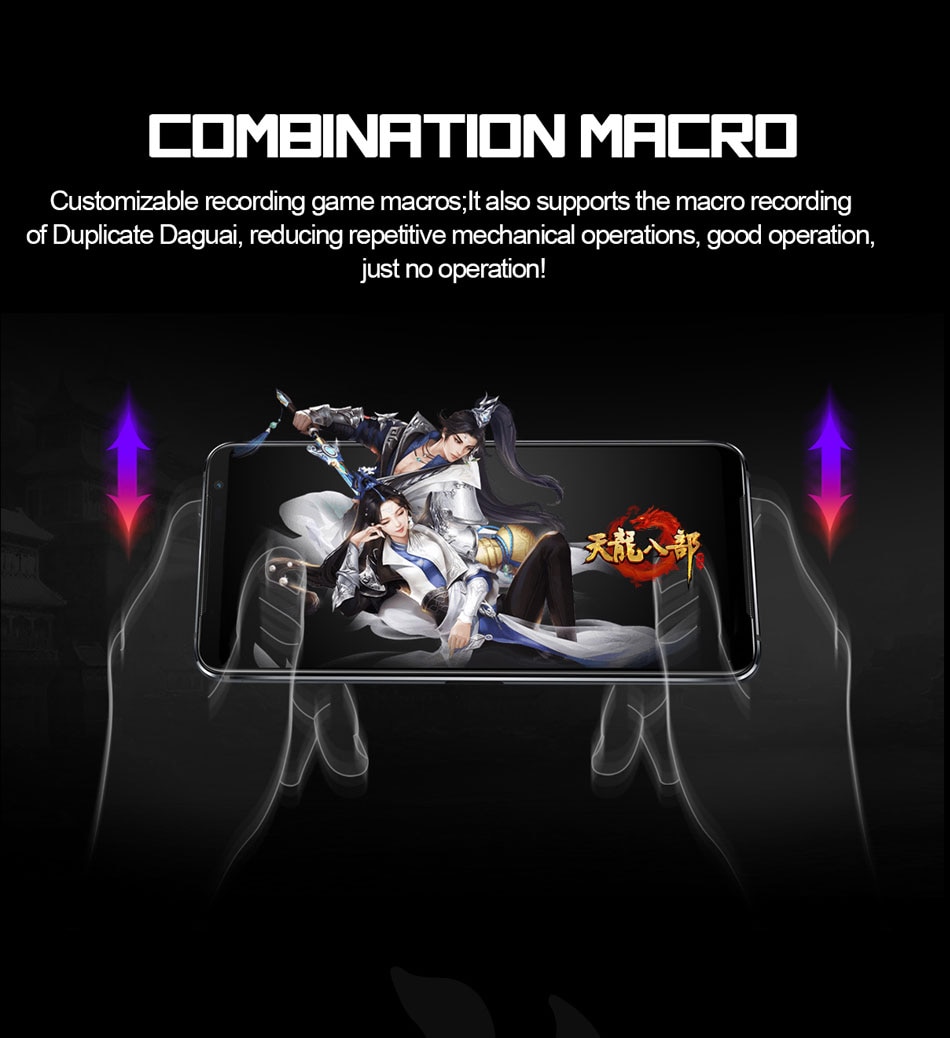 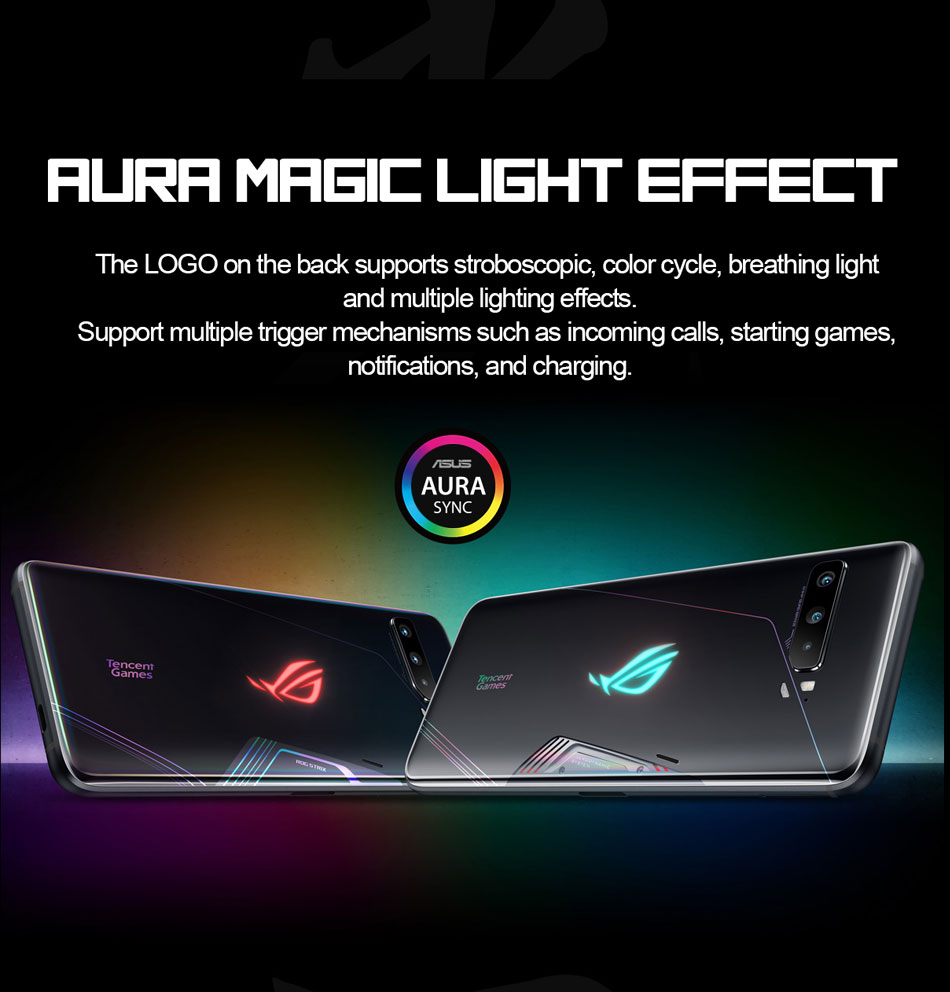 Through the SHS vibration algorithm, “Glory of the King”, “The Heroes of the
Three Kingdoms-Overlord’s Industry”, “Crossing the Line of Fire”, “QQ Speed”
brings a more realistic and three-dimensional game experience, and is
constantly updated to adapt to more games. 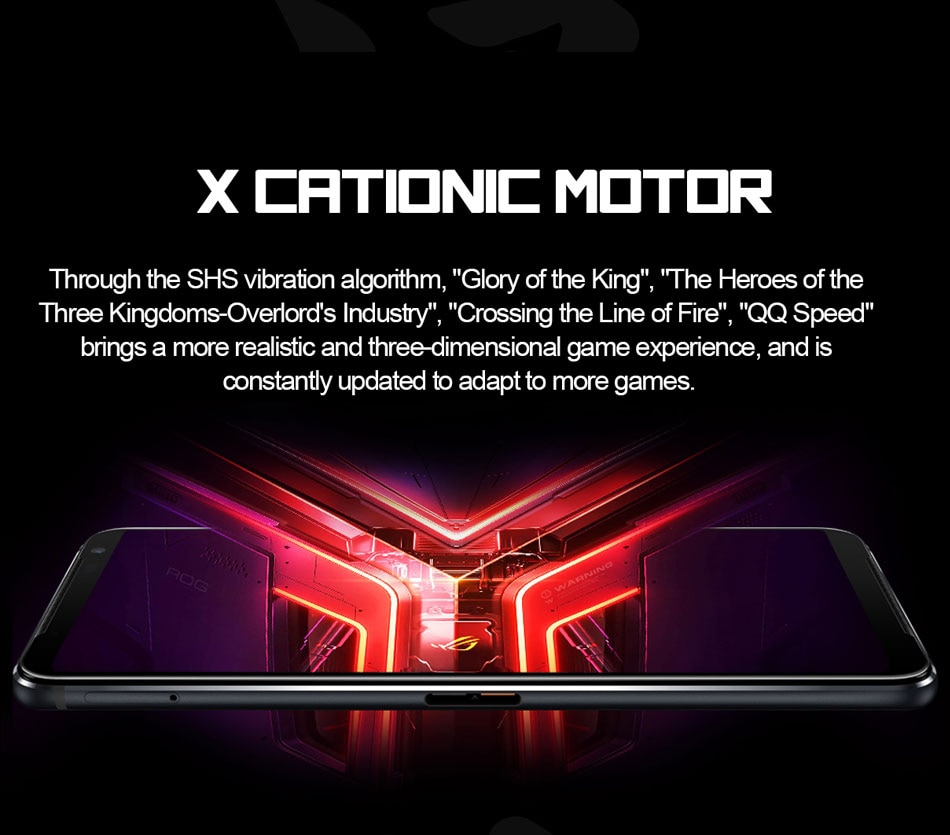 4Wi-Fi antenna design has no fear of blocking the signal. HyperFusion and Tencent Storm’s network acceleration program are blessed, which can accelerate from the root of the game server, while simultaneously connecting 2.4G and 5G dual Wi-Fi channels, and intelligently switch the best network between dual-band Wi-Fi and 5 networks according to network conditions, C position No disconnection, no interruption of output.

Tencent Solar Core 3.0
Game acceleration engine
Tencent customized optimization program, the game loads faster, the network is more stable, the delay is lower, and it is reduced by 460! You can also interact with various event lighting effects with popular Tencent games such as Honor of Kings. Three kills and five kills highlight moments, the lighting effects are added, and the glory is doubled! 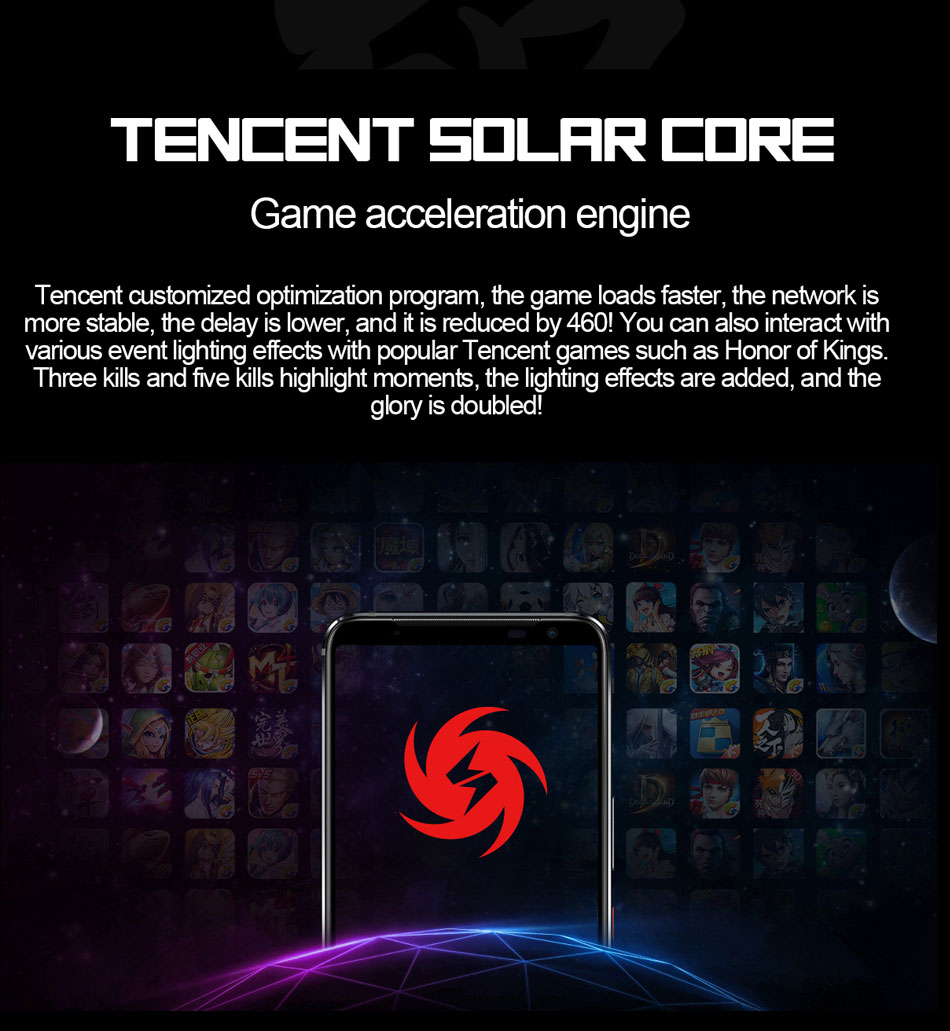 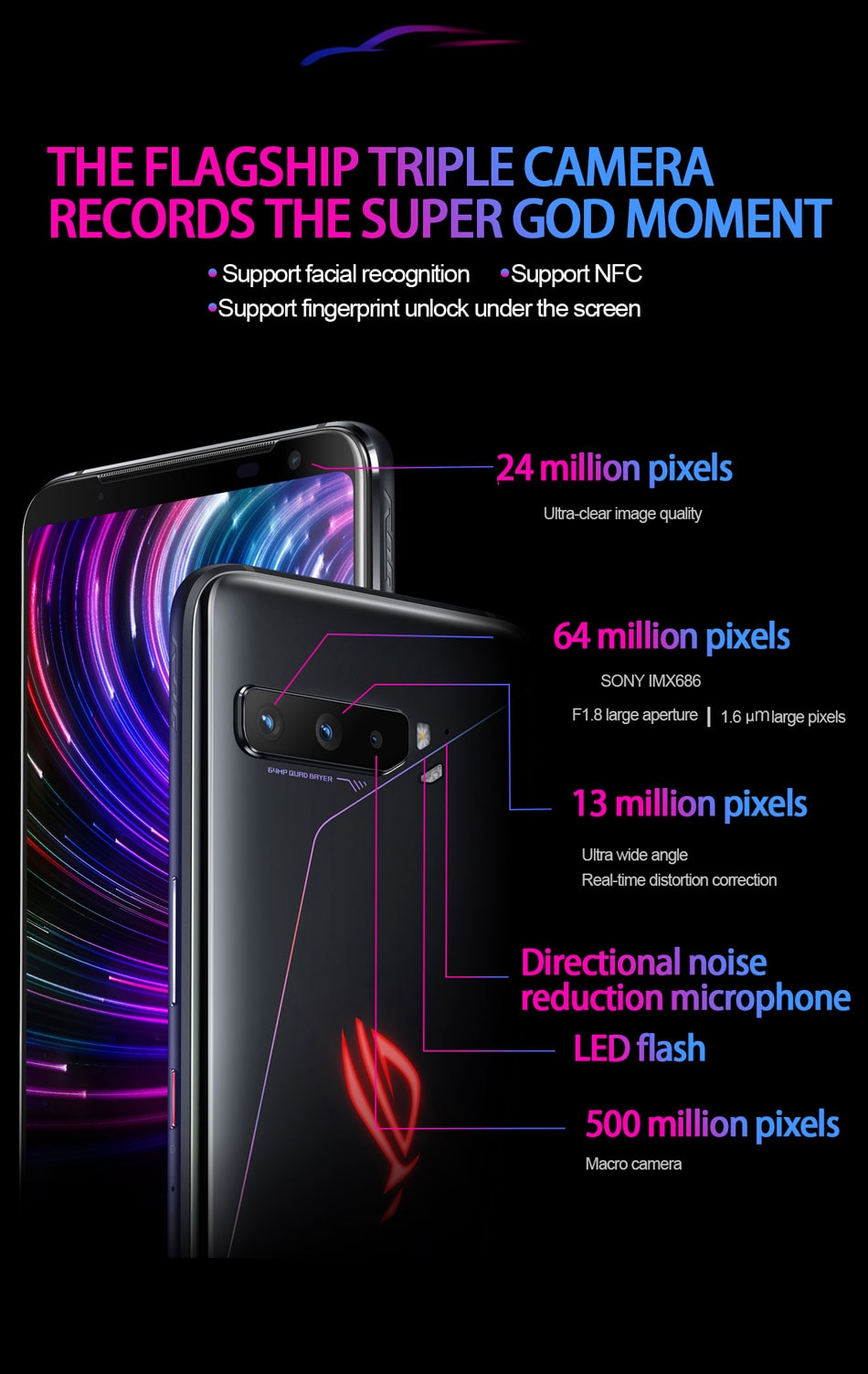 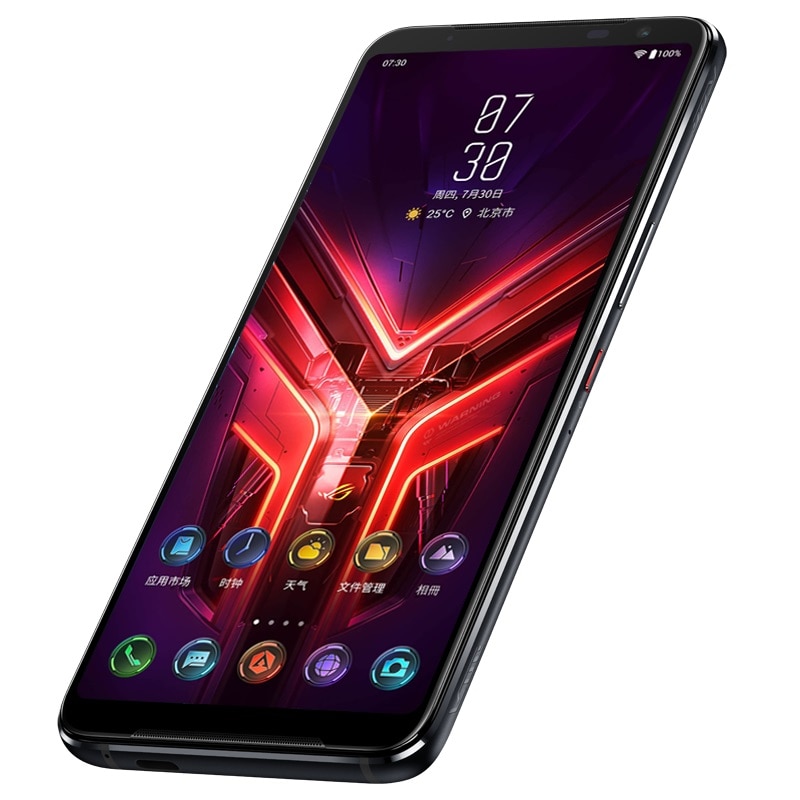 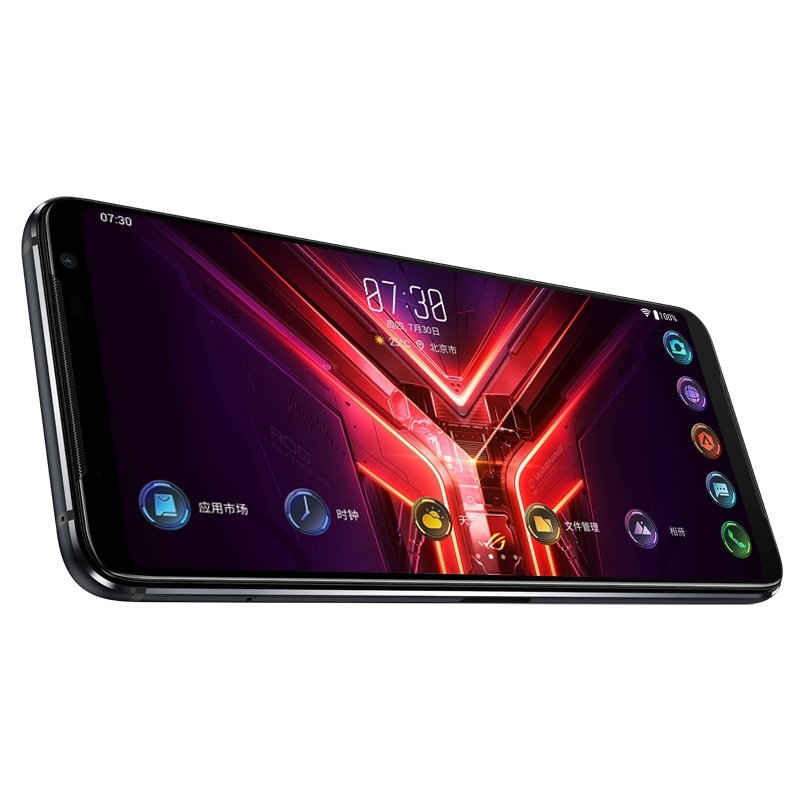 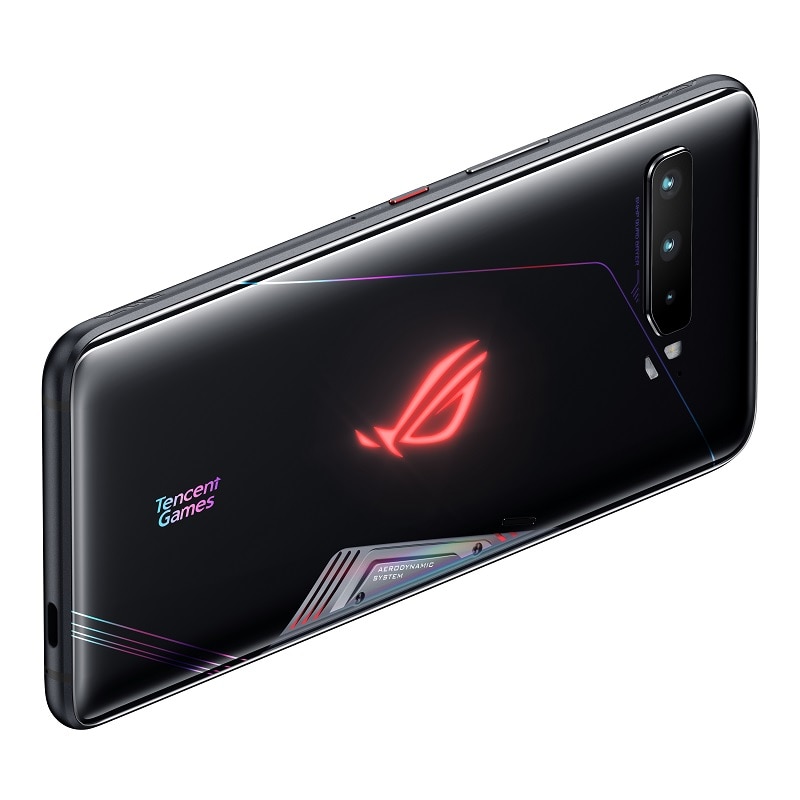 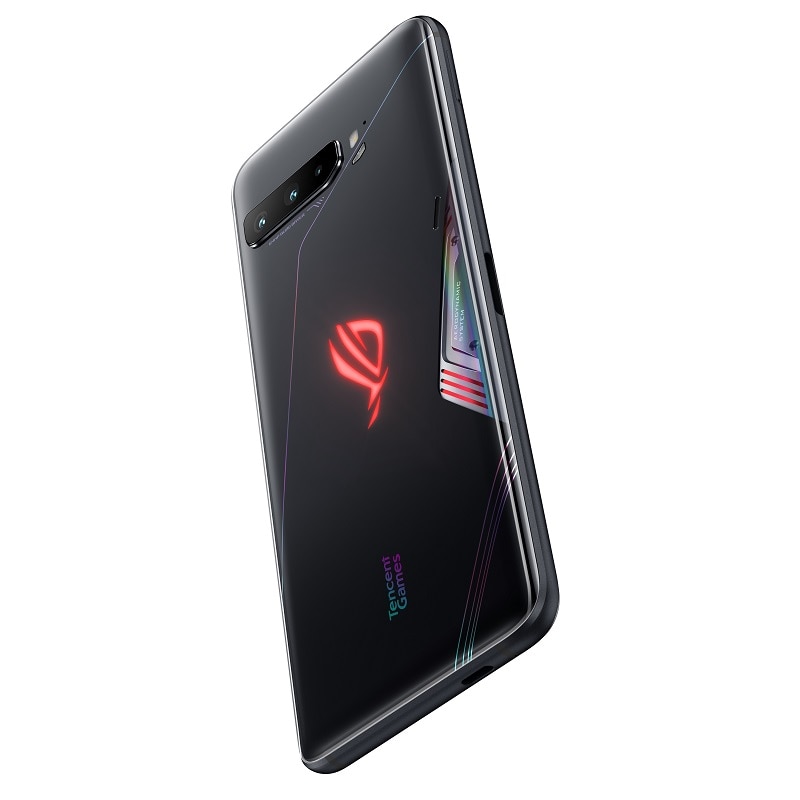 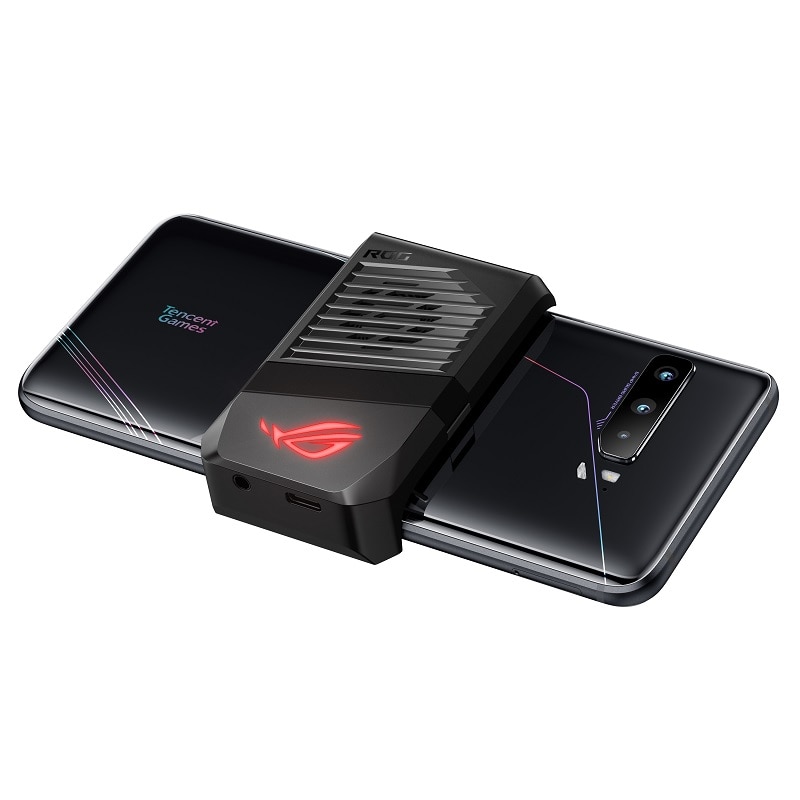 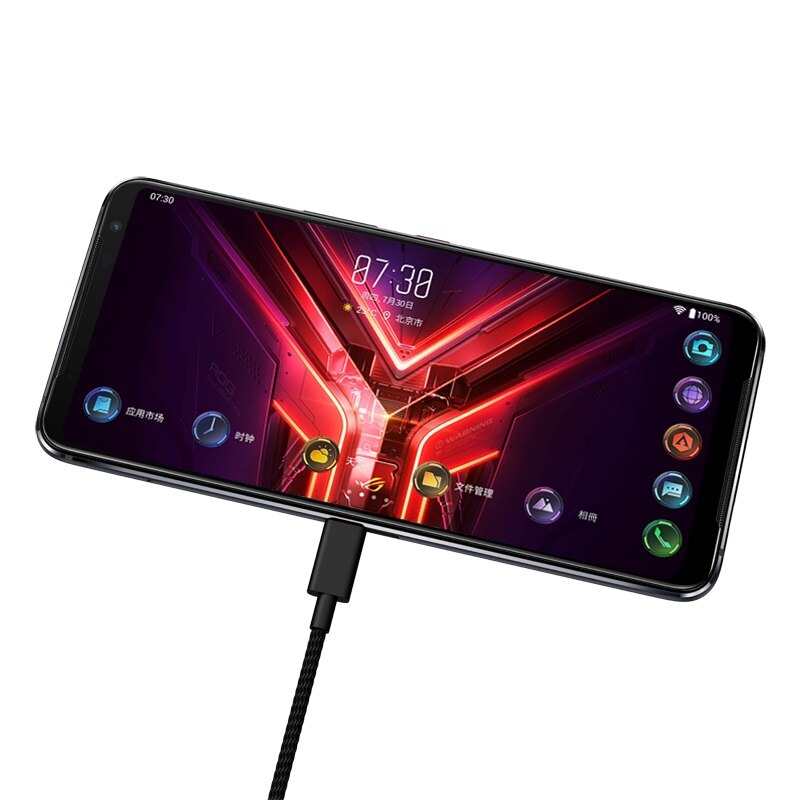 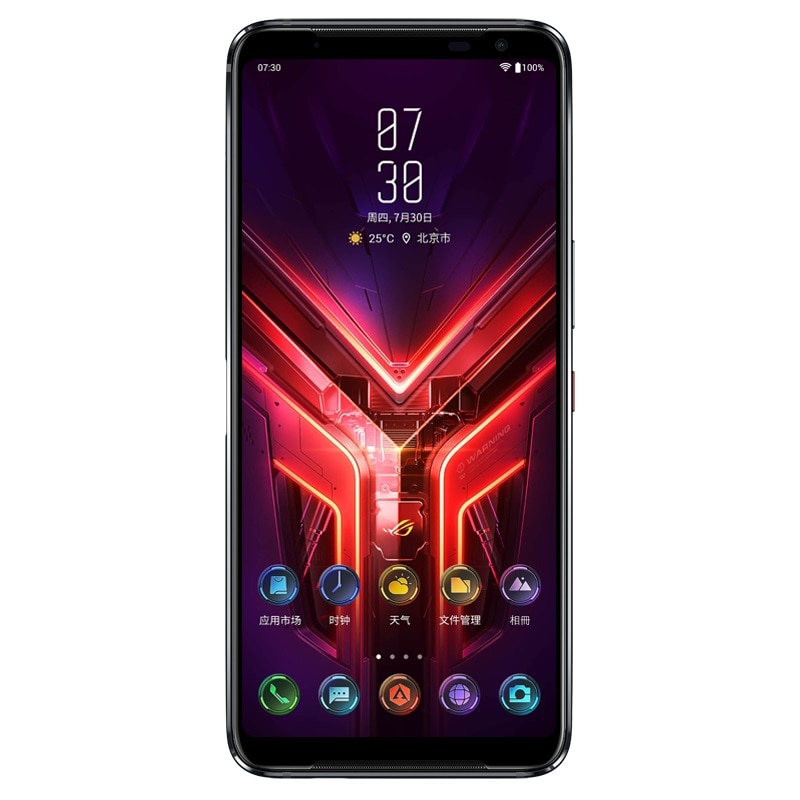 Q: What is your store warranty rules?
A:6 Months Store Warranty
(1) Offer refund or replace within 3 days upon delivery, we do not bear returned shipping cost;
(2) Offer repair within 30 days upon delivery, we bear the shipping cost for sending back to you;
(3) Offer repair after 30 days upon delivery, but you bear two way shipping cost;
(4) Notice: for full refund, please send full package back (including all accessories); for repair or replace, please send only product without accessories.
Q: I need pay for customs duty?
A: BecauseDifferent countries have different tax policies. You may be charged custom duties and taxes for something purchased online. Buyers are responsible for custom taxes, our saling price does not include any custom taxes.
The cost of return or lost parcel would be on buyer due to reject cutoms clearance. We don’t accept dispute of customs problem.thanks for your understand.
Q:Will my mobile phone work with a certain mobile carrier or i am traveling to another country and want to make sure your phone works there?
A:
http:willmyphonework.netcan help you find the answer
Notice:
We will send some free gift for you,if you need the special adapter,please contact us ,we can not accept the dispute about the free gift,thanks for your understand